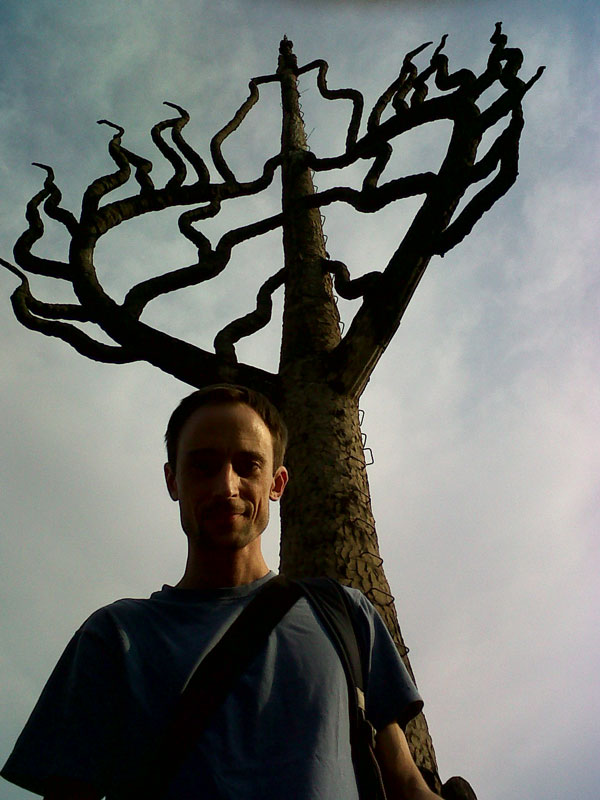 My first encounter with Scott Nicholson was as formidable and extraordinary as our 19 year friendship. I found him sitting in the surf on a remote beach in the Andaman Islands, in 2000. I was about to go swimming and we said hello to each other, the way two westerners do three thousand miles from home – there was no one else around. He mentioned he was from Detroit. I vividly remember the tattoo on his back, a star or a compass. He had the most beautiful, piercing and haunted blue eyes one could ever hope to look into. Everything was in there and more.

He grinned and we started talking…The MC5, Alice Cooper, The Stooges, The White Stripes, Fred Sonic Smith, the Dirtbombs. He sent me a T Shirt of the Grande Ballroom (which closed in 1972), where all our favorite bands had played.

Scott spent years on the fringes of the Detroit rock scene and he’d rubbed shoulders with all the greats and not so greats, from Wayne Kramer to Kid Rock. He was a Michigan RocknRoller boy, through and through.

We lost touch after that first meeting, but Scott found me again a few years later. I’d become a writer and he was about to give up his job as a federal agent at Detroit Metro Airport. He was coming east. And for a few years, Scotty was in my life again. We traveled through the wilderness of Laos together, burnt away countless nights in Phnom Penh, he stayed with me in Bangkok.
But Asia wasn’t for Scott. He was a truly sensitive soul, touched by the injustice of the common woman and man. The decrepitude of Cambodia and the lack of opportunity for ordinary people in Laos, as well as the terrible American legacy in Southeast Asia, brought him down.

He cut his losses, returned to the US, qualified as a teacher, met a great woman and lived happily ever after. We skyped. He became a landscape photographer, his images were published in illustrated books on Michigan. I featured several of his Cambodia images in one of my guidebooks.

Scott was proud to be American – his father had served in Vietnam – but he was also fiercely critical of his country’s dark side and was as disturbed by the great American unraveling as myself. He no longer felt safe in Detroit and had bought himself a gun, even as he deplored the violence in the US. We talked music, books and politics, eastern and western.

He read everything I published and he was a good critic, constructive and honest. He sent me books – his last gift, Detroit by Charlie LeDuff is lying on my desk, unread. My two most recent books were lying on his table and sitting in his computer. We had planned a trip to Colombia together, where he’d spent some years during the bad old days of FARC. I was thinking of visiting Detroit, but I was slow.

And then he left. Just like that. Heart attack at 40-something after a hard, misspent youth and what I sensed were plenty of moments of sunshine in recent years, not least because of the wonderful woman, Laura, and her two kids, with whom he’d settled into what felt like a great equilibrium. He’d made peace with his parents. He’d taken his father on a road trip through Nicaragua. He took photos.

Scott was the very epitome of that line from the Quiet American, “Sooner or later…one has to take sides. If one is to remain human.”
Scott remained human. After a long and hard journey, perhaps he sensed that he’d gotten his redemption. That can’t be said for all of us.

See you down the front, brother.

Live Interview on Rudy Maxa’s World Radio Show on Saturday,10.18 am EST US