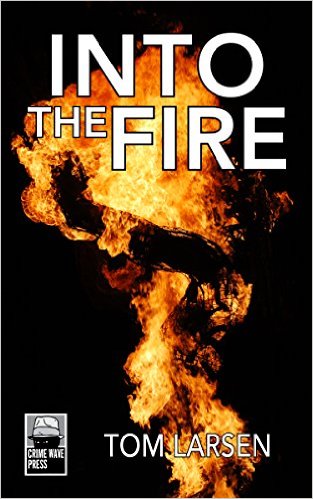 Very proud to announce that INTO THE FIRE is the 20th title published by Crime Wave Press.

The debut by Philadelphia based writer Tom Larsen is a wonderful and ever so slightly mean satire on Hollywood screenwriting. For now it’s out as an amazon kindle. The POD is coming later this year.

Ray Ellis is a Hollywood screenwriter on a roll. In his latest screenplay, he uses personal experience – an unpleasant incident on an overseas flight – to introduce his femme fatale. Meet Karen Finley, stranger on a plane, set up by Ray, locked up in jail. A mistake, it turns out. They show movies in jail and Karen is an avid watcher.
Back out on the street, driven by an enduring hate for the man who ruined her life and turned her misery into entertainment, Karen plots revenge and starts to screw up Ray’s magical high flying life. Ray soon wises up as to who’s after him, but Karen is miles ahead, plotting Ray’s downfall with enough perverse singularity to pack a dozen Hollywood screenplays.
Into the Fire is cautionary tale of fame and hubris, funny and shocking in turn, a fast-moving thriller that casts a wry eye at everyday pettiness and our desire for justice, no matter the cost.

Short film: SHANK by Roy Harper – An explosive thriller by one of America’s most wanted outlaws!