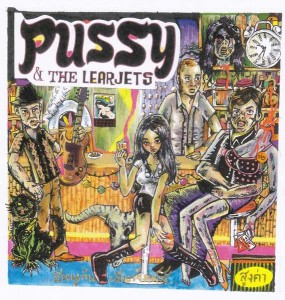 In case any of my readers have been wondering what I do when I am not writing, especially when it gets dark in Bangkok….

….I moonlight with Pussy & The Learjets, the loudest and wildest Rock’n’Roll band, who perform in club toilets, wine bars and riverboats in Bangkok. The band, fronted by the incredible Pussy aka Chantakahn Om, has just released a first single on Metal Postcard Records – a 7″ vinyl picture disc and has recently been on tour in China.

The two songs on the Learjets’ small vinyl masterpiece can be listened into on SoundCloud, and more importantly, can be purchased on iTunes and owned by you! Buy into Pussy & The Learjets now!

Recorded in two different studios in the Thai capital, mixed by local Wunderkind Melvin LaSalle, who has since absconded to London, remixed by the fantabulous Rock’n’Roll veteran Lars McLounge Deutrich in Berlin and helped along by the flaming rhymes of Liberian Hip Hop artist Morris S. Turay, the A Side is a cover of the legendary 1960s Rock’nRoll Texas hit Nothing Can Bring Me Down, originally performed by The Twilighters, while the B Side features the band’s very own funky take on Thailand’s Sacred Tattoos, Itchy Skin.

The single is accompanied by a frantic video, shot by Austrian director Wysforce.

There’s also a fantastic rockumentary about Pussy & The Learjets by photographer Gerhard Joren.