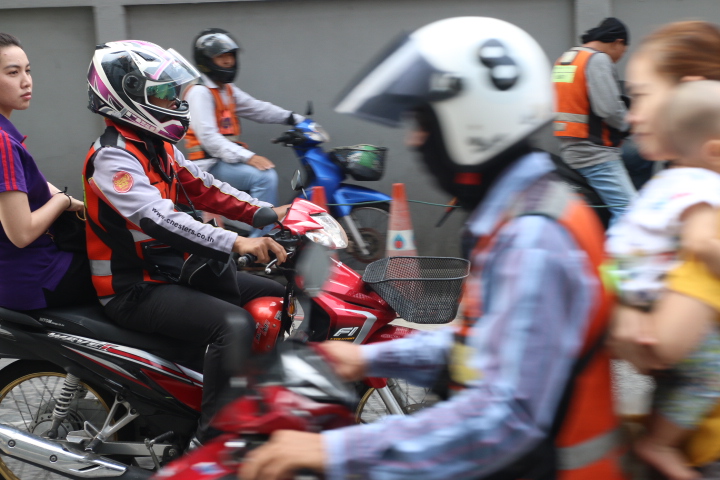 My partner in crime and journalism, Laure Siegel, will be part of a panel on Bangkok’s motorcycle taxi industry on April 18th at the city’s Foreign Correspondents Club, following our story, published last year in the Nikkei Asian Review, on women pushing into this hard and very male profession.

Details of the event:

There is much more to the ubiquitous motorbike taxi riders hanging around street corners in Bangkok than the chance for an edgy ride through the city’s traffic. Italian anthropologist Claudio Sopranzetti came to Bangkok via Harvard University in 2008 and plunged into the colourful world of street politics and motorcycle taxis for his academic thesis. His book, ‘Owners of the Map: Motorcycle Taxi Drivers, Mobility and Politics in Bangkok’, published in late 2017, highlighted the political role of the motorbike taxi drivers in the 2010 street protests and beyond, how they filtered and influenced mobility in protest areas and, in their own ways, challenged state hegemony. The resulting thesis and book followed his 2012 work ‘Inside the Thai Red-shirt Movement’. The 2014 coup ushered in significant changes to the world he portrayed, including sweeping new regulation of motorcycle taxis and moves to unionize riders. Other changes include the growing involvement of women riders, hastened by the government’s crackdown on streetfood vendors.

An expert panel will examine the evolution of the motorbike taxi movement and the changing reality of Bangkok’s street economy, focusing on elements such as the advent of new apps, the challenges of organizing and “regularizing” a previously unwieldy and relatively under-regulated industry, the rise of women, and influences on street politics and protest movements.

Questions also loom about why this group with its prominence during the Red Shirt protests of 2010 has remained largely inactive politically since, and what comes next.

The FCCT is pleased to welcome the following distinguished panelists:

Claudio Sopranzetti, author of Owners of the ‘Map: Motorcycle Taxi Drivers, Mobility, and Politics in Bangkok’, and a postdoctoral research fellow at All Souls College, Oxford, focusing on politics, urban development, economic crisis and capitalism. He will join the evening by Skype from Europe.

Ussarin Kaewpradap, a specialist in international affairs at the State Enterprise Workers’ Relations Confederation of Thailand, which comprises some 45 state enterprise and private sector labour unions with a total membership of over 200,000.

Chris Baker, winner last year of the Fukuoka Grand Prize with his wife Pasuk Phongpaichit, has written and co-written numerous books on Thai history, economics, and culture including ‘A History of Thailand’ and ‘Thaksin’.

Chaloem Changtongmadun, president of the Motorcycle Taxi Association of Thailand, and advocate for motorcycle taxi formalization

Admission to the panel is Free for FCCT members, 450 Baht Non-FCCT members, and 150 Baht for students and Thai Journalists with ID.

It was 24 months ago today! – Bangkok in Flames