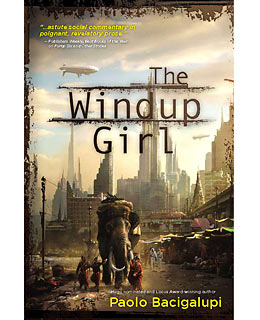 The definitive Bangkok novel has not been written yet.

But The Windup Girl by Paolo Bacigalupi, a dark and fast-moving Sci-Fi novel set following the reign of Rama XII, gets pretty close.

Local hacks should take note – this 500 page tome is light years ahead of the rather tepid Bangkok Noir genre. The dystopian Bangkok of the near future described here is as dark and twisted as its current reality, and while there’s plenty of sex and violence, as well as fantastic nods to Thailand’s political culture, current troubles and foibles – some of them uncanny and truly prophetic as the book was published in 2009 and appears to predict some of the kingdom’s much more recent political and social developments – the American author never gets unstuck half-drunk between the steel poles of a go-go bar.

Set in a world destroyed by Monsanto-type agricultural corporations, religious fundamentalism and sheer and somewhat familiar greed, The Windup Girl features an engaging cast of characters. Reviews in TIME and The Guardian miss out on the many Thai subtleties the author has gleaned from his research in the kingdom, which make the novel an even more fascinating narrative for readers familiar with the Land of Smiles.

Beg, borrow or steal this one, if you can bear the genre and its attendant vocabulary….

Thailand goes to the Polls!

Interviewing Pomme Chan – On Board the London to Bangkok Illustration Express

It was 24 months ago today! – Bangkok in Flames