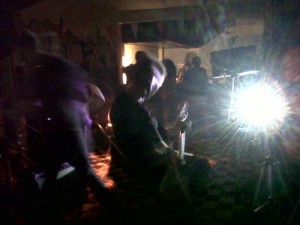 The crowd surges forward. The singer, a 40 something skinny white guy, screams into the microphone, which has been taped to the top of a camera stand. The room is so hot that water drops from the ceiling. The linoleum is coming off the floor in long torn rolls of dirty plastic. The drums thud like painful bowel movements, the guitars sing like angle-grinders. The entire room feeds back and one has the feeling of being inside the moving turbine of an airliner. But it’s not unpleasant. It´s punk rock.  The only lights come from a projector and a bed side table lamp. The bar sells little other than beer. A man in front of me bumps into a fat woman who falls heavily. For a second it looks like she is going straight through the floor, but the building remains structurally intact, for now. A young muscular punk with a Mohawk and a T Shirt that reads ‘Teach your children to worship Satan’ is trying to hang sheets across the broken windows – the cops have already been around once tonight, complaining about the noise. The skinny old white guy starts screaming again. The crowd, unkempt, lost souls in need of a wash for the most part, pogo and dance, drink and scream like there’s no tomorrow.
New York? London? Paris? Berlin?

No, this is Bangkok, Thailand. Welcome to the Overstay, the city’ s dirtiest, skuzziest, most amateur music venue and hotel. It’s 3am on Saturday night and the no-name punk band clears the stage. The audience, young low budget wasters  – hippies and crusties, punks, freeloaders and the confused – have trolled in from the near-by Khao San Road, Bangkok’s backpacker ghetto, bringing a few Thai night lights – rock chicks, tattooed hard men and other lonely souls with them. There’s one more band to play. Waiting for them is like waiting for the end of the world – everything at the Overstay is slightly apocalyptic, starting with the toilets and including all other aspects of this cheap flop house cum music venue.

In fact, the Overstay is so much more than a hotel, bar or club – in its short existence, the establishment has managed to ignite a shit storm of negative publicity on the Internet, garnering shocked reviews for its one-dollar rooms (free in low season) on Trip Advisor and many other hotel-booking pages. Reviewers gush forth hundreds of words, warning fellow travelers about the pitfalls of the Overstay – dirty, unsafe, noisy as hell, with the foreign owner allegedly enslaving those who can no longer pay into running errands. And yet, some of those very same reviewers stay four nights. Beats me.

Until recently, the Overstay had a much more traditional function. The building, located in Thonburi, east of the Chao Praya River, was a brothel. It’s said that two murders took place in there during its glory days. A resident ghost is rumored to haunt the building, but I never did venture into the toilets and hence missed him/her.
As the next and last band, The Klong Riders, get ready for their show, the audience, tanked on Leo and Chang, the cheapest beers available in Thailand and the only ones for sale at the Overstay, has a chance to meditate on a unique cultural gem – this, for better or worse – is Bangkok’s only squat. It is also the city’s only underground music venue of sorts. The Overstay has no air-con, no cocktails and no chattering ex-pats in ironed polo-shirts with dolled up bimbo secretaries in tow. There are no journalists here and even what you might call regular tourists are unlikely to be attracted by the decor and the ambience.

The Overstay is completely horrible and many voices on the Net demand the place is closed down. It is not safe.  It is a shame to Thailand. It would be an embarrassment in any city, and this makes the Overstay vital in Thailand’s capital, an urban sprawl of eleven million people that boasts no alternative music venues. Virtually no rock bands play in this town and those who do are forever in search of clubs to play. Most night spots are either karaoke-hell meat markets, internationally themed pubs in the worst possible taste, or bright, cool and aspiring spaces for the aforementioned chattering classes. Youth rebellion and RocknRoll don’t quite fit into traditional Thai culture. That’s why there are thousands of disenfranchised kids out on the streets every night with nothing to do, smoking amphetamines and racing their souped-up bikes into early teenage graves (or urns, as local culture and faith prescribes). Unlike their adolescent equivalents elsewhere, these kids have no cultural outlet. And they don’t even have an Overstay, as that is dominated by foreigners.

The Klong Riders hit the stage. That´s a largely metaphorical statement, there is no stage as such. The band plugs in on the third floor and roars off, the crowd shakes and screams, they know they are getting their money’s worth – admission is only a dollar and a half. The singer, a tall skinny guy playing his pitch-black semi-acoustic like a machine gun, vomits up his soul and launches into a surf guitar instrumental loud enough to douse the local community in sonic napalm. Welcome to the Overstay. Check it out. Just don’t use the toilets. 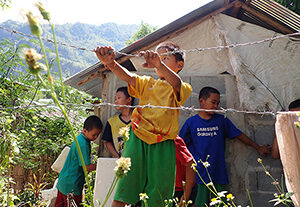 8 thoughts on “The Overstay – Thailand´s Worst Hotel is a Gem! Just Don´t Sleep There.”