Sacred tattoos, called ‘sak yant’ in Thailand, have been around Southeast Asia for centuries and afford protection from accident, misfortune, and crime. Young women get tattooed with love charms in order to attract partners, while adolescent men use the protective power of their yants in fights with rival youth gangs. For most though, the tattoos serve as reminders to follow a moral code that endorses positive behavior.

During the application of a sak yant, the tattoo master establishes a series of life ‘rules’ that need to be closely adhered to, starting with Buddhism’s first five precepts. Failure to observe the master’s instructions will cause the sak yant to lose their power.

Beautifully photographed these are tattoos that are the essence and ‘key’ to individual identity, a philosophy for living, the translation of soul to skin, as complex as the leaves of an autobiography, the story of a life

Chinese New Year in The Daily Telegraph…and on the streets of Bangkok. 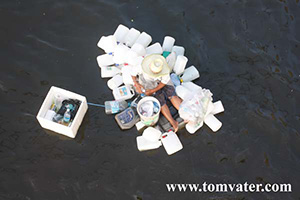 Southeast Asia’s sinking cities: can they be saved?, in Eco-Business