It was two years ago today when Thaksin Shinawatra’s Red Shirt supporters confronted the might of the Thai military and were dispersed from downtown Bangkok, following months of occupation, confrontation and violence. Since then there’s been a change in government in Thailand and Thaksin’s sister Yingluck is now prime minister. The deputy prime minister allegedly owns an 88 million Baht fleet of luxury cars, including a pink Bentley, one of only two in the world (the other is in Paris Hilton’s garage), so the people’s revolution has made great strides since then.

None of the killings, the looting or anything else that happened during those heady and tragic days has been properly addressed in the interim. None of the Red or Yellow Shirt leaders who led civil unrest campaigns in recent years have been convicted.   The heavily armed fighters on the side of the Red Shirts have never been identified. The military has not been taken to account for allegedly shooting some 90 people. The assassination of Sae Daeng, a renegade general who joined Thaksin, has not been investigated. The killing of several journalists remains unresolved. The conflict in the south of the country, between the military and a shadowy Islamic rebel movement, continues unabated. But the shopping centers have been rebuilt and the rest has been brushed under the carpet, still smouldering.

The fix that Thai people are in, stuck as they are between an establishment that appears to care nothing for their welfare and an opposition movement that is largely paid and misled, remains. The red shirt followers have no clear idea of political reform and are stuck under the umbrage of a former PM who has been convicted for fraud, oversaw a war on drugs (in 2003) that resulted in more than 2000 extrajudicial killings by the police and is an international fugitive. Schemes that allegedly benefit the poor but actually just cement the power of a very small elite on either side of the political divide pile up so fast you need wings to get above them – tablet computers in schools where the children’s curiosity is discouraged, the attempt to freeze street food prices while the price of food supplies continues to rise, the list goes on.

Read the Thai news this week and there’s police robbing banks, politicians long disqualified for corruption trying to re-enter the government arena with not a shred of shame, and a minimum wage that does not work. Since Yingluck Shinawatra’s unlikely ascent to power, freedom of expression has not improved, if anything it has gotten worse – the government’s non-reaction to the death in prison of Uncle SMS, an elderly man who suffered from cancer and got twenty years for sending four offensive text messages in breach of article 112, and the banning of a film version of MacBeth are shining examples of the continued suppression of dialogue in the kingdom.

As before the 2010 spasm of violence, both sides of the political divide play an all or nothing game, wanting the entire cake and eat it. Red and Yellow Shirt supporters are equally uncompromising in their rethoric, and the Thai military continues to see itself outside of the ‘democratic’ process.

On the plus side, tourism is bouncing back. Traditional western tourist arrivals are slowly declining, but the number of Russians visiting Thailand has doubled in the last couple of years and cheap package tours now enable vast numbers of Koreans and Chinese to sample the kingdom’s delights.

The political spasms gone for now, the population breathes a collective sigh of relief and gets on with life, until the next time the system caves in on itself, manipulated by this side or that and forces Thai people to focus on the political mess they are in – for a few days, weeks or months. Thankfully, the Thais don’t appear to have the stomach for all out civil conflict: the yearning for harmony and comfort and the justified pride in their beautiful country will hopefully prevent cataclysmic polarizing disasters in the future. That said, the avoidance of large scale enmities alone is unlikely to lead to comfortable solutions for Thailand’s deeply rooted problems.

The Daily Telegraph with my 2 Bahts worth on the coup in Thailand. 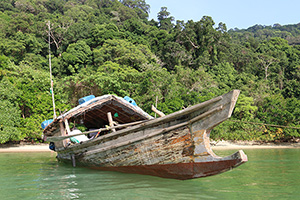