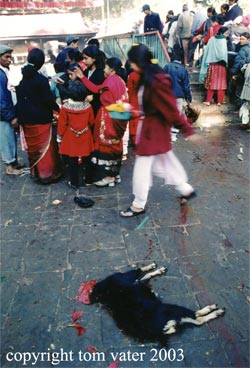 There are many Kali temples in the Kathmandu Valley but only one demands daily sacrifices – Dakhshin Kali. And on Saturdays, the blood runs faster, deeper and longer than on any other day.

The first rays of the sun break through the pine trees that cover the steep slope that seems to drop right down to the center of the earth. A narrow concrete staircase is lined with hundreds of pilgrims, slowly descending into a dark, melancholy twilight. The crowd is subdued, expectant, quietly radiant.

Hundreds of meters below, in a deep narrow gully where the sun barely reaches, a small temple is already packed with devotees. And hundreds of animals have been sacrificed there since dawn.

It’s mid-December and the morning is ice-cold. The valley is cloaked in fog, with only the upper crests of the Himalayas breaking into a rose tinted morning. For most people the trip to this mountain side twenty kilometers out of the Nepali capital Kathmandu, is an annual pilgrimage. Men and women stand huddled together, wrapped into thick blankets, waiting patiently to approach the shrine they have come to visit. Many hold cockrels and ducks in their arms, some have brought black goats.

Police armed with guns and sticks stand guard along the staircase and a short narrow bridge the pilgrims have to cross in order to enter the temple compound. Security is tight.

Shiva, the most important Hindu deity in Nepal, creator and destroyer of the universe, has a shakti, a consort, who appears in many forms – as the beautiful benevolent Parvati, the terrible Durga or the horrific, apocalyptic and evil Kali.

The temple in the gorge below, on the banks of a small river, is dedicated to Kali, who is usually depicted with a malla, a garland of human skulls hanging across her breasts, her tongue hanging from her mouth down to her chin, an obscene violent expression of hate and terror on her face, her skin black as night.

As the sun touches the bridge, the animals get restless and the air is full of incense and the smell of death. Thick acrid smoke rises from several fires and huge boiling vats in a small shack by the side of temple compound on the small river’s edge. Old Newari ladies sit on the first platform of the temple compound, lighting hundreds of brass pots filled with ghee, clarified utter and a short wick. A few Sadhus, dread-locked orange-robed holy-men, who walk the Indian subcontinent without possessions or objective, beg food and money from the pilgrims.

The police herd all visitors across a second small bridge into the main temple compound. Several large brass dragons stand guard at the entrance of the Kali Shrine – only Hindus may proceed from here. The marble floor is smudged with fresh blood. The pilgrims, now in single-file, pass the gate into the shrine bare feet, carrying their sacrificial animals, which must all be un-castrated males. A constant ringing of heavy brass bells threatens to drown out the loudspeakers. The faithful lead or carry their animals past the image of Kali before proceeding to a long altar-like shoulder high marble table. Three young men in dirty blood stained rags, wielding long, curved knifes await the pilgrims. These men are Kassi. The Kassi are Kali’s executioners.

The Kassi grab the ducks and cockrels, pull their necks straight, and in a casual instant of sacrificial reality, cut their heads straight off. Blood squirts in thin streams over the white marble stone and runs into a shallow drain. The men throw the heads on top of the white stone and hand the twitching carcasses back to their owners who pay a few Rupees for each kill and wade through ankle deep blood and guts out of the inner temple yard. The Kassi are on a constant kill roll, they barely look at the animals or their owners.

A young black goat is led right up to the drainage ditch. The first Kassi, by now splattered from head to foot in blood, grabs the goat’s head, whips it back and carves briefly, with enormous pressure into the struggling animals’ head. It’s all over in a few seconds. The Kassi drops head and body to the floor. Two dying eyes watch the strong black body convulse across the marble tiles, while bits of throat and blood continue to pump out of the goat’s serrated neck. Kali is insatiable.

There is no time to lose, the crowd is pressing. Outside a queue snakes back halfway up the hill to the parking lot area.

The Kassi are restless between kills. The pilgrims quickly file out onto the temple platform, carrying or dragging their dead fowl and goats with them. Some place a ghee candle on the goat’s heads and walk ahead of the carcass. The animals are taken to the small shack on the far side of the temple platform. A gang of ten adolescents and young men grab the corpses and throw them into a huge vat of boiling water. Once in the water for a few minutes, the skin and feathers are quickly pulled off and the animals, now ready for cooking, are slung back to their owners.
On the small platform above the inner sanctum a young couple is blessed by an old Brahmin man, relatives looking on.

Sanjeev is ecstatic, “I am getting married at Dakhshin Kali, because it’s such a holy place.”

His wife looks uncertainly at the carnage below. The young man has bloodstains at the bottom of his silver suit, luckily the bride wears a red sari. The ceremony completed, the couple pose for photographs taken by an teenager with a wind-up Kodak and head for their villages.

By 9am, the entire compound is covered in blood and small body parts. The atmosphere outside the inner sanctum is both reverential and carnival-like. Nepalis who visit this temple in their tens of thousands, if not hundreds of thousands every year, follow an age old tradition currently under fire from several animal rights groups. The only visible concession to the modern world is a sign that reads ‘Visit our religious website, www.dakhsinkali.org’. The site doesn’t work.

Once their meat is packed, the pilgrims either walk back up to the road, to catch a bus back into town or get caught up in the fair selling everything from seasonal fruit and vegetables to Hindu iconography in every shape and size that has sprung up on the road directly above the temple. In this mini-mela, a cross section of the Nepali population wanders past stalls and hawkers selling trinkets, posters and khuar, a milk-based fudge. Tibetan nuns stroll around with an air of bemused curiosity; tourists, exhausted from the climb, point their camcorders at the packed road, capturing perfectly genuine impressions of Nepal.

In the bushes on the slope to the temple several pavilions have been constructed – the gorge of Dakshin Kali is one of the most popular picnic spots for the upwardly mobile of Kathmandu and villagers from other parts of the valley.

By mid-morning the pavilions are all occupied. Families, groups of tough boys, school classes and students have set up for lunch on every vaguely horizontal piece of ground available. On the menu: Goat, chicken or duck.

Each group has brought its own loudspeaker system and set up barely a stone’s throw away from the temple, Heavy Metal, Nepali Pop and Bollywood film songs blast through the trees.

Guna runs the cantine at Tribhuvan University, just outside Kathmandu. Today he cooks sacrificial chicken for thirty students who are dancing on a small square on the steep mountainside. He smiles at the dancers and comments, “We come here once a month in the winter, as it’s not far for us. None of the teachers are here. We all go to the temple and then we come here and have a party until afternoon.”

But it’s not just undergrads, who have discovered that Dakhshin Kali is a weirdly pleasant place to spend the day with your friends.

A couple of students have set up a bingo game and a gaggle of teenage girls, most dressed in tight jeans and fashionable jackets crowd around the two handsome MCs who read out the numbers. Others stand under the trees, busy with their mobile phones and personal stereos. A long way from Kali, it seems.

Sodip, one of the young men, his face flushed and sweaty, explains, “I have been here many times with my parents. If they knew what I am doing now, they would not understand.”

He takes a sip of beer and laughs, “We’ve got pills, we’ve got ganja, we get drunk. Nepal is changing. We celebrate.”

Kali, drunk on the blood of a thousand animals, must be pleased.

3 thoughts on “Dakshin Kali – Bloodbath for a Goddess, in Untamed Travel Magazine”