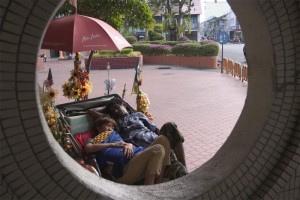 I shot this very early in the morning in a public square in Penang. Both of them were fast asleep in the back of the rickshaw, and there was no on else about yet. Maybe they were lovers, or maybe they simply had no where else to go, but there was something touching about it.

When I put the shot on flickr, 100s of people looked at it- something clearly reverberates between viewer and image. Is it merely the fact that these two are lying in each other´s arms in Malaysia, where showing affection between the sexes is rare in public? Or the fact that they are a mixed couple, that she is of Chinese origin while he is from India?