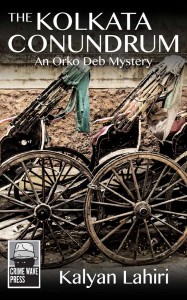 Very happy to say that my publishing house Crime Wave Press have released their 24th title. The Kolkata Conundrum by Kalyan Lahiri is a classic detective tale set in the infamous West Bengali capital.  The tale of a murdered high so lady is the first Orko Deb Mystery, following the adventures of a sometimes hapless private eye and his employers The Golden Red Security Agency, and we are looking forward to the next one.

The mysterious and alluring Pramila, resident of Avantika Heights, is brutally murdered. Sudhir Das, the security guard from the Golden Red Security Agency, is caught red-handed.
In steps Sudhir’s boss, young Orko Deb, the hesitant avenger.
His cautious sleuthing, all over Kolkata, throws up more questions than answers.
Who is Pramila?
Was the National Bank involved in money laundering?
Or was it simply a crime passionnel?
And who robbed the jeweler’s store?
Then the media frenzy begins and Golden Red is like a deer in the headlights. The police take charge and Orko lies low.
Until he is arrested.

From the Archives: Hampi: Ruins Forgotten in Time