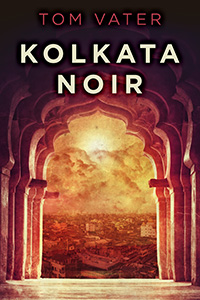 My novella collection Kolkata Noir is finally out with Next Chapter.

During the Raj, Calcutta was the world’s second most economically powerful metropolis. In 2019, Kolkata, eastern India’s largest city, stands at a crossroads. Unlike Delhi and Mumbai, the West Bengal Capital is anything but an economic powerhouse. Its remote eastern location and decades of communist rule have seen to this. Many young middle-class Bengalis are leaving for other cities or go abroad for lack of opportunity back home. But this stasis has also kept crime rates and pollution levels lower than in other Indian cities. It has kept American fast food out of the inner city. The sheer amount of remarkable British and Bengali architecture surviving from the early 20th century is incredible. The communal tensions between Hindus and Muslims are surely present, but have not burst into the open with the same ferocious violence as in parts of northern and central India.

For foreign visitors, Kolkata is a challenging but rewarding time travel experience. Kolkatans are extraordinarily friendly. There are book shops. The food is excellent. One can walk. It’s pretty safe. Kolkata, bustling, hustling, almost on its knees one day and flying high without a license the next, is never ever boring.

Most of Kolkata Noir was written in Kolkata.

In 2019, I was selected by the Goethe Institut/Max Müller Bhavan Kolkata to write crime fiction set in the West Bengal capital as part of the annual Indo-European Artist Residency. Once in the West Bengal capital, Director Friso Maecker and Program Officer Sharmistha Sarker were staunch supporters of my ideas and our discussions helped form this small contribution to the rich cultural tapestry of the city.

I am indebted to Kolkata’s famous detective Feluda, the brain child of legendary Bengali film maker Satayjit Ray, who provided the initial spark for Kolkata Noir. I made no attempt to revive or copy Ray’s story-telling and yet Kolkata Noir might never have been written, had it not been for my long love affair with the city of which Feluda is such an integral part.

Kolkata Noir, a crime fiction cycle of three novellas, is set in the past, the present and the future.

The first story – Calcutta – takes place in 1999. The plot is in part an homage to the classic French Noir movie Les Diaboliques.

The second story – Kolkata – takes place in 2019. The plot is in part an homage to Sonar Kella, one of West Bengal’s best-known crime stories, written by well-known art house film maker Satyajit Ray.

The third story – Killkata – takes place in 2039, when the city is half submerged, thanks to rising sea levels. The plot is in part an homage to the 1942 movie Casablanca.