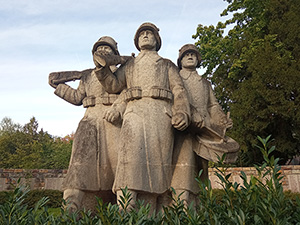 A few days ago, a man called Deckert died in Weinheim, the town I come from in Germany. Deckert was a member of my home town’s local council from 1975 to 1999 and again from 2019 until he died. He was also a teacher and a civil servant. Deckert joined the far right NPD in 1966. He repeatedly engaged in Holocaust denial and hate speech, and yet he wasn’t fired until 1988.

While I was in school – the local Gymnasium – in the early 80s, the student union published a left-leaning magazine with several other schools, critical of American foreign policy. Our school’s director claimed the magazine had been financed by the Soviets, and made us go into the local forest with our German teacher where we were instructed to burn the magazines. Burning allegedly unsound literature was common in Nazi Germany.

It took Germany until 1995 to put Deckert in jail. He taught generations of students and poured his poison into local communities for decades. The Ministry of Education and local authorities failed, again and again to shut him down. None of this happened in isolation. It was part of a wider problem.

For all the soul-searching and laws criminalizing hate speech, former Nazis, members of the NSDAP, SS and SA remained in the Bundestag, the German parliament, as well as in countless other positions of power and authority until the 1990s. The reason they are not there today is not because their war records eventually came to be perceived as too unsound, but because they are all dead. But there’s a new generation of far right, racist, populist politicians in today’s Bundestag, as well as in local councils across the country.

When I was a teenager, Weinheim was full of far right sympathizers, that’s why Deckert could operate in the region for decades and organize fascist meetings in town without getting locked up and shut down.

There’s a huge, ugly-as-anything, concrete monument of three German soldiers in the centre of Weinheim, honoring combatants who died in WWI. Anyone driving through town will pass the granite combatants. When the monument was built in 1936, the names of Jewish soldiers who had fought for Germany in WWI and whose families had partly paid for its construction were omitted. In 1959, in the new, democratic post-war (West) Germany, the monument was enlarged to honor dead soldiers of WWII (what were they thinking?) – the new list included 29 members of the SS – their war records hidden they were listed as ordinary soldiers (that’s what they were thinking). A new sign argues that the monument, constructed to serve the glorification of war and the honoring of murderers, can be re-imagined as a document of different historical eras that is supposed to ‘challenge viewers into engaging with history in a conscious and sensitive manner’.

Weinheim has since built another monument near-by to attempt to put the continued existence of the erstwhile Nazi monument into context, but local and regional authorities hardly engaged with Deckert or his many supporters in a conscious and sensitive manner, instead choosing to vilify counter-cultural leftists and anti-fascists.75 years after the end of WWII, Weinheim should get rid of its Nazi monument, now that Deckert, the region’s most infamous living specimen has gone wherever it is dead fascists go.

British citizens recently toppled some of their slave trader statues. In the US, there’s a culture war around the continued existence of monuments to southern racists, some of which have been dismantled. At a time when fascism is making a comeback in German (& European) mainstream politics, knocking the monument down and building a library, a youth centre or a welcoming centre for the next wave of refugees, wherever they may come from, would make Weinheim a more enlightened, more attractive town.

That won’t be enough to solve Germany’s far right problem. Given that this historic microcosm probably repeats itself across the country, Germany should perhaps use the money it is so intent on spending on re-militarizing to instead strengthen democratic institutions, rewrite the social contract in favor of citizens, invest in liberal education, clean up industry and the environment, curtail wealth concentration, tax the rich properly and close the wealth gap, to make sure Germans feel less existentially threatened, so that today’s Deckerts don’t have a platform.

My Indo-European Artist Residency in Kolkata 2019

The Detective Maier Mystery Series – at Amazon for 10US$