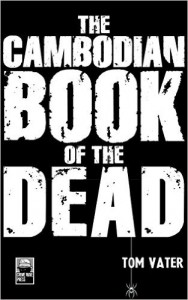 THE CAMBODIAN BOOK OF THE DEAD is featured in this week’s writer’s round-up at Paul Brazill‘s this week: What Goes On? Vater, Bird, Tomlinson, Miles.

I’ve just republished THE CAMBODIAN BOOK OF THE DEAD, the first in the Detective Maier Mystery series, with Crime Wave Press (www.crimewavepress.com) as a Kindle. The second book THE MAN WITH THE GOLDEN MIND will be out soon as well.

After the demise of Exhibit A Books, the original home of the Maier series, the rights of the two books reverted back to me, so Crime Wave Press, a Hong Kong based imprint I part own, was a natural platform to republish the books with.

THE CAMBODIAN BOOK OF THE DEAD follows  German Detective Maier as he travels to Phnom Penh, Cambodia’s ramshackle capital, to find the heir to a Hamburg coffee empire.

As soon as the private eye and former war reporter arrives in Cambodia, his search for the young coffee magnate leads into the darkest corners of the country’s history and back in time, through the communist revolution to the White Spider, a Nazi war criminal who hides amongst the detritus of another nation’s collapse and reigns over an ancient Khmer temple deep in the jungles of Cambodia.
Maier, captured and imprisoned, is forced into the worst job of his life – he is to write the biography of the White Spider, a tale of mass murder that reaches from the Cambodian Killing Fields back to Europe’s concentration camps – or die.

In the second Maier Mystery, THE MAN WITH THE GOLDEN MIND, Julia Rendel asks Maier to investigate the twenty-five year old murder of her father, an East German cultural attache who was killed near a fabled CIA airbase in central Laos in 1976. But before the detective can set off, his client is kidnapped right out of his arms. Maier follows Julia’s trail to the Laotian capital Vientiane, where he learns different parties, including his missing client are searching for a legendary CIA file crammed with Cold War secrets. But the real prize is the file’s author, a man codenamed Weltmeister, a former US and Vietnamese spy and assassin no one has seen for a quarter century.

I’ve just finished a first draft of a third Maier Mystery, THE MONSOON GHOST IMAGE which is set in Thailand.  I’m very happy to bring this Southeast Asian trilogy to a close with a big bang. Maier 3 is set in 2003 and revolves around the CIA renditions program in the wake of 9/11. Maier is sent to Bangkok to find a famous German war photographer who died in a boating accident but surfaces, very much alive, months later in the Thai capital. Turns out the photographer snapped a frame that everyone wants to get their hands on – the CIA, Maier and a third mysterious party who has put a price of 2 million dollars on the elusive photo.

So I will be editing for the next couple of months.  I really enjoyed writing this one. The character has become familiar and Thailand was a natural choice for the book’s main location, after Laos and Cambodia. As with the first two books in the series, I had a solid historical backdrop on which to build my story and the time I spent with Thailand’s sea gypsies in the late 90s served as rich material for part of the story. It’s been mad fun.

From the Archives: The Bunong – The Caretakers of Cambodia´s Sacred Forests – Part 3

The Cambodian Book Of The Dead published by Exhibit A in the UK, US and Canada in 2013!!!