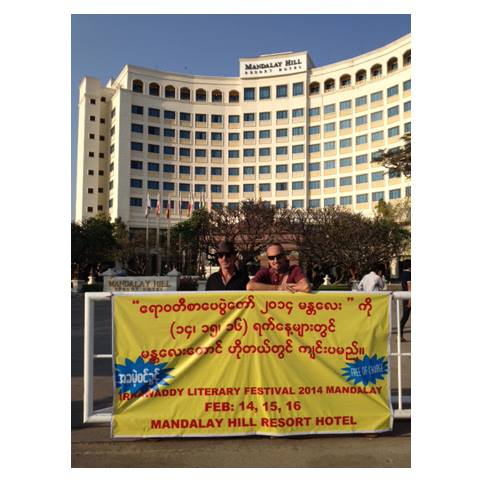 I am at the second Irrawaddy Literary Festival in Mandalay, organized by Jane Heyn, the wife of the former British ambassador to Myanmar. This second festival is held in Mandalay and has been in preparation for almost a year. Top writers appearing this time around include Jung Chang, Louis de Bernieres, and Thant Myint U.

Crime Wave Press is here to present some of our new titles and photographer Hans Kemp and I did a multimedia presentation yesterday on Burmese Light, our new illustrated title.  I took part in a panel on crime fiction with Douglas Kerr and Duncan Jepson, read from my novel The Cambodian Book of the Dead and moderated a reading and talk for our author Jame DiBiasio who presented his first novel Gaijin Cowgirl.

From the start, the festival has apparently faced opposition from conservative forces in Burma and hours before the opening dinner on Friday, the minister of culture who had originally suggested the festival be held around the Kuthodaw Paya, a historic pagoda in Mandalay, sent a letter to the organizers, suggesting the location was not suitable after all. With almost a hundred writers, many from abroad, already gathered, and the world’s eyes on the festival, Burma appeared to be trying to prove that it remains a basket case, a tropical backwater beset of schemers much like U Po Kyin, the corrupt magistrate in Orwell’s Burmese Days. Yes, Myanmar remains a country quite unlike any other (to paraphrase Kipling, another voice associated with the country in its colonial days). 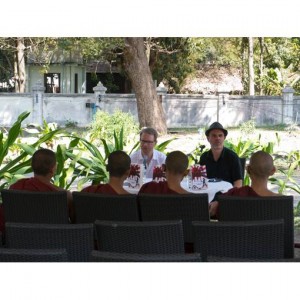 But controversy did not stop there. The festival’s mains sponsor, the Htoo Foundation, is owned by Tay Za, a notorious crony of the military junta which pretends to have given up some of its power in order to simulate something like democracy for Western observers, international investors and potential donors. Tay Za has long been internationally black listed for buying weapons used to suppress some of Burma’s minorities. It’s uncertain how much Daw Aung San Suu Kyi minds rubbing shoulders with her erstwhile enemies this and reiterates again and again that peace will only come about through forgiveness. Burma’s future possible president has no interest in any reckoning, in a truth commission or any other kind of investigations into the years of injustice. But as one long term Burma watcher and celebrated author said, “I think I liked it better in the old days. Then it was clear who the enemy was. Now the enemy is everywhere.”

Read a wrap-up of this conundrum by Jame Di Biasio.