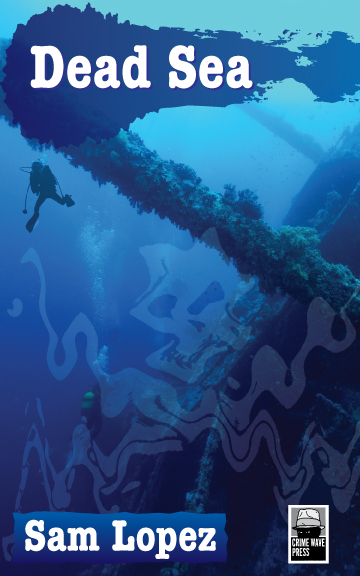 Hold your breath! Mark down the dates! Crime Wave Press will offer the high seas thriller Dead Sea by Sam Lopez for FREE as an e-book download from amazon on December 22,23 and 24!

Check out this new fantastic review of the book on amazon by Sandeman:

It’s been said that the start and end-points of a journey are irrelevant, for it’s the time in-between wherein lie the crux. In Dead Sea by Sam Lopez, this adage is cleverly deconstructed. After a somewhat hasty intro, the reader is introduced to the main protagonists, Tara and Luke, who through violent serendipity, voyage half-way around the world trying to regain some of their recently departed youth. The setting is the Philippines, and the flash-forward reveals that the now tired couple has been roaming the burned out, South-East Asian backpacker circuit for a few too many Full Moon Parties. Luke has nothing to lose and Tara, who initially was trying to lose what she had, is now attempting to quantify what she is actually doing with her life. To her frustration and disillusionment, Luke plays the passive distractor, changing the scenery when necessary to keep the spontaneity, or illusion of it, alive and well. It’s just this spontaneity that finds the couple pining for ever more remote islands in the massive Philippine archipelago, pushing the envelope of escapism, if not the idea of it. One of the key distractions that Luke has in his arsenal is their mutual, newly-found love of scuba diving. It’s quite evident and duly noted that the author must have relished many such experiences himself. Rich and descriptive verbal tapestries are woven together while the air-bubbles pass through the reader’s imagination. This lends an added aquatic mystery to the events unfolding both below and above the waterline. The bulk of the book is crafted slightly out-of-sequence, with events in the near-past explaining how the couple has found new `friends’ to accompany them through their illusory island paradise. The story ends in much the same fashion as it began, somewhat anti-climactic with questions left unanswered. The pleasure derived from reading this story is the adventure itself, with the unknown answers to those questions dissolving into trivial details. Nevertheless, they compound the mystery of the story and their absence is effective, even after the last page has been turned.

Monsters of Rock & How I Started to Write