Very pleased to announce that I’ve been invited to perform at the next Bangkok Poetry event on Saturday, July 21st at Opposite in Tong Lor. The event starts at 8pm.

Bangkok Poetry is a reading series devoted to the lyrical, the risky, the unexpected. Happenings are every six weeks.

Check out the fb page for further details on the evening! 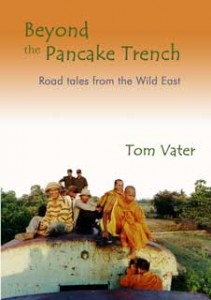 I wrote about one of Bangkok Poetry’s earlier incarnations almost a decade ago, when events were held at the About Cafe in Bangkok’s Chinatown. That text was published in my first book, Beyond the Pancake Trench.

It’s all about the About Café

Subculture can be a bit hard to come by in Bangkok. At least as far as any subversive, dark stuff is concerned. And this in a city where almost everything is subversive, one way or another. So, for the jaded ex-pat there is not much to do once he’s swung between the turgid girlie bars and beer bellies and the hang-outs of the corporate consumer backpacker generation which descends like a plague of locusts on Thailand. Caught between the pages of a porn mag and Lonely Planet? Finding it much the same? Increasingly it’s hard to tell the difference between these two tribes, the backpackers like to indulge in the sex trade and the sex-pats pop pills and try to look like overweight hippies once they hit the beach. A gray zone unfolds, in tune with the country where nothing is ever quite what it seems.

In between there are no tribes, just dislocated eccentrics, mercenaries, drug dealers, travel writers, drop-out artists, professional wastrels and undesirables who have gotten tired of drifting and fallen into the arms of the city of angels. Where do they meet? What do they do?

One place they go is the About Café on the edge of Chinatown. Once every six weeks, a guy called Wes hosts a poetry night in this otherwise clean and chic Thai youth hang out. Yes poetry. You are expecting Ginsberg beards and bead wearers? Long dead those people. Wes has other things on his mind. Last Saturday Bangkok Poetry opened with a Thai punk band, barely old enough to hold their guitars, but loud enough to bring cops to the door within a couple of songs (short songs at that, one two three four…here comes another one). It doesn’t take much to be subversive in the eyes of the powers that be in this town, a joint sends you to jail, customers at flash discos get urine tested at the end of the night, student reformers get shot by the police, mainstream journalists harassed, investigated, bugged and trailed, while the government is on the golf course heeding photo opportunities with local chao paw (Godfather).

Despite all that people go out to have a good time.

Especially the ‘Farang’, as white people are called here, a Thai derivation of ‘francais’. How negative this is remains open to debate. One Thai chronicle referred to farang as ‘…exceedingly tall, hairy and evil smelling. They school their children long, and devote their lives to amassing riches. Their women, though large and round, are very beautiful. They do not grow rice.’

The Thais always smile when they use the word. Sometimes, when we fail in the Thais’ great virtue of ‘jai yen’ or cool heart, we are called ‘farang kee nok’ (kee nok means bird shit, perhaps we seem to be falling from the sky).

I’m getting side tracked. No wonder. Hey, it’s the land of smiles, the city that never sleeps unless forced at gunpoint, as is the case under the current moral crusade of the Thaksin government.

Wes does powerpoint poetry. His delivery reminds of Ben Elton but he lacks the moral simplicity and perceived outrage of the British stand-up, who, in any case is doing rubbish with Lloyd-Webber these days. What I mean is, Wes is sharp, observing, funny, self-depreciating. ‘That’s what I do!’ is his catchphrase. He does most things you can do in Bangkok, so there’s no room for pc sentiments, there’s no preaching, or handy tips of how to cope with the daily revelation that life is not only a bitch but murderously hard and fundamentally flawed for most members of the human race, especially for those living in this part of the world. Wes trades in cynical observation and double irony. A post-modern Howl without the howl. This is the sound of 21st century Interzone. The dejected and jaded global underground rears its confused but brilliant head in Bangkok for one night.

Why does he only do this every six weeks?

“It takes me that long to write the next poem, bands I could get all the time, but I don’t want to open a venue for Thai students, I want to run an evening where anyone, no matter how eccentric, can come on stage and say his piece.”

And they do, several other ‘poets’ follow Wesley, a hard act to follow. They mumble, they stumble and some provoke response but the king has left the building. The next band is from Malaysia. They play punk rock too. In the UK someone would be throwing bottles of piss at this bunch after the first song. In London a ‘proper’ punk band might even like that, taking it as a kind of low down street respect. Here no one throws piss, the Thais nod politely, the band rages, the Farang cling to their beers and are back to ogling the many beautiful girls, the big gangsters in tight shirts and mirror shades and the plain clothes overweight cops who stand in the corner, disapproving, waiting for the word go. The evening finishes off with the premiere of someone’s film. Badly shot and edited video images flash across the screen, escalators, men smoking in drab hotelrooms, bar girls, sky trains, bus stops, traffic, 7/11s, escalators. It’s hypnotic. The city of angels, Khrong Thep as the Thais call their capital, seemingly pushed to the margins for an hour with this cosmopolitan event, has been at the center of Bangkok Poetry all along. There’s no escape.

Bangkok: After the deluge – in the Daily Telegraph

48 hours in . . . Bangkok, an insider guide to Thailand’s colourful capital in The Daily Telegraph