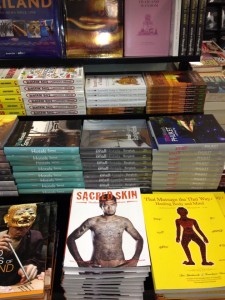 Photographed by Aroon Thaewchatturat and written by myself, the book was originally published in July 2011.

Copies of the book’s second edition, hot off the press, are out now, as Australian journalist Flip Prior noticed while out shopping in Bangkok today. Thanks to Flip for the photo!!!

Read the review of Sacred Skin in TIME Magazine. 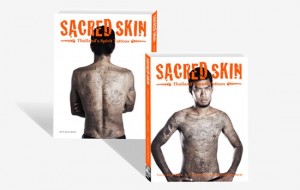 Sacred tattoos, called sak yant in Thailand, have been around Southeast Asia for centuries and are said to bestow protection from accidents, misfortunes and crime.
Every day, young men and women gather in temples and countless tattoo masters’ studios around the country to get inked: Tens of thousands of teenagers, motorcycle and taxi drivers, construction workers, night club bouncers, street vendors, factory employees, boxers and working girls – an entire strata of Thai society – are having a second, magical skin applied. Indian mythology, Buddhism, Brahmanism, animism and common superstition make for a colorful hotchpotch of religious ideas embedded into skin. For the wearers, the tattoos serve as reminders to follow a moral code endorsing positive behavior.

Sacred Skin is an introduction to the sak yant, Thailand’s spirit tattoos, and the men and women who bring them to life on their skin.

Interviewing Pomme Chan – On Board the London to Bangkok Illustration Express