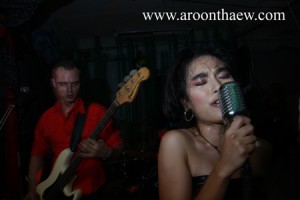 From the vaults…a new track by Pussy & The Learjets, who played Bangkok punk rock for twelve months and then crashed and burned, as any great band should.

This is a cover on The Thirteenth Floor Elevators You’re Gonna Miss Me, a huge song.

And yes, I played guitar for The Learjets.

With Manis on Fire on bass, Patrice L’Amour on drums and Om aka Pussy Saetehn on vocals and shock therapy entertainment duty.

It’s still possible to buy Pussy & The Learjets’ supersexy 7 inch vinyl picture disc. The cover is worth the price of admission…

Click on the single cover below to purchase the MP3s.

Check out the video to the single, produced by Wysforce, Nothing Can Bring Me Down.

Check out a short documentary on Pussy & The Learjets by Gerhard Joren.

Sing along to Dirty Water, Pussy & The Learjets’ ode to Bangkok.

And groove to Itchy Skin, the B-Side of Pussy & The Learjets’ debut single.

From the Archives: The real Phuket – Tom Vater reports on the Vegetarian Festival for Fortean Times