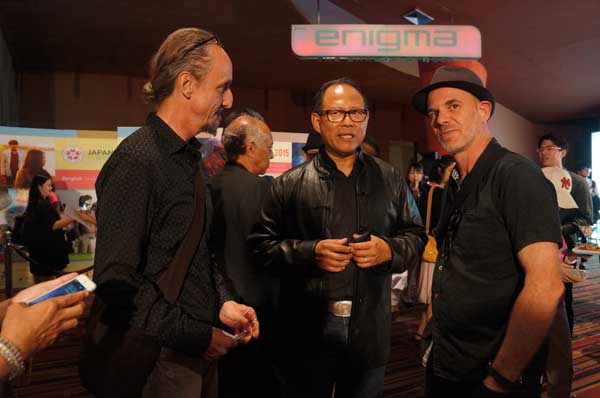 A real pleasure for myself and Hans Kemp to meet Vithaya Pansringarm, the actor who played Father Ananda in Mindfulness and Murder, published byCrime Wave Press, at the Bangkok premiere of Lupin III. And Khun Vithaya is keen to do another Father Ananda movie.

About the novel by Nick Wilgus:

When a homeless boy living at the youth shelter run by a Buddhist monastery turns up dead, the abbot recruits Father Ananda, a monk and former police officer, to find out why. He discovers that all is not well at this urban monastery in the heart of Bangkok. Together with his dogged assistant, an orphaned boy named Jak, Father Ananda uncovers a startling series of clues that eventually expose the motivation behind the crime and lead him to the murderers. “Mindfulness and Murder” is the first in the Father Ananda murder-mystery series.

An award-winning movie based on Mindfulness and Murder was released in 2011 by DeWarenne Pictures in Bangkok and nominated for Best Screenplay by the Thailand National Films Awards 2012.

Praise for the Father Ananda series:
“A gripping read peppered with fascinating insights into the day to day life of a Buddhist monk. Nick Wilgus’s Mindfulness and Murder puts a new spin on an old genre.” — UNTAMED TRAVEL MAGAZINE

“Wilgus … has a good fix on temple boys, the precepts of Buddhism, the jaundiced eye with which the populace regards the constulabary, the vendors, the weather, the air pollution.” — BANGKOK POST on Garden of Hell

“Nick Wilgus’ first novel is great. May Buddha protect Father Ananda and send him many other exciting adventures.” Livres Hebdo

My Selection of Bangkok Festivals in The Daily Telegraph