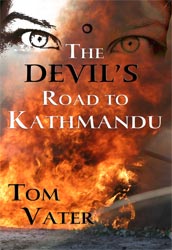 Yes, there is now a facebook page on The Devil’s Road to Kathmandu, my 2005 novel. This new amazing facebook feature will feature news, reviews and updates on this ripping story of three hippies who drove a bus full of drugs from London to Kathamndu in 1976.

There are plans to republish The Devil’s Road to Kathmandu as an ebook in 2012!

In the meantime, here’s the low down…

25 years later, and the former hippies are lured back to Kathmandu with a promise to collect their share of the money. The Hippy Trail has long gone cold and only the help of Dan’s offspring, a tattooed lady and a Tibetan sage can unravel the mystery of their misspent youths.

Tom Vater’s first novel, ‘The Devil’s Road To Kathmandu’, was published in Hong Kong with Dragon’s Mouth Press in 2006.

Global trekking across Asia is becoming increasingly difficult. War, terrorism, ever tighter Immigration rules are blocking the traditional land routes. And travel by plane doesn’t qualify as backpacking. Authors of wayfaring novels must set them years ago to make them plausible.
Which is what British freelance journalist Tom Vater does in his first book of fiction The Devil’s Road to Kathmandu. In fact he sets the story in two different years, 1976 and 2000, alternating between them. The years are safe, the first prior to the overthrow of the Shah in Iran, the second prior to the US invasion of Afghanistan. They, along with Pakistan and Nepal are the key countries in the plot.
The author makes a serious effort to capture the mindset of the backpacker. The characters are always stoned, hump like minks, seek to connect with the vital force of the universe. If there’s a way to make money without working for it, even when dangerous, they go for it.
In 1976, Dan, Tim and Fred pool their savings and buy a second-hand Bedford bus and head for the East. What they have in common is the determination to reach the Khyber Pass, buy drugs and re-sell them at a substantial profit. Experiences along the way are detailed. At one point they pick up Thierry, the Frenchman dealing himself in.
There are girls, of course, every bit as horny. Making the strongest impressions are Lida and Madi, Armenian sisters, entertainers, Siamese twins. Immigration officers are invariably corrupt, demanding bakshish to stamp their passports.
The deal almost proves fatal to no fault of their own. The Pathans involved are having a blood feud, shots are exchanged and some passengers die. Though they get the money, it’s safer to deposit it in a Kathmandu bank than to attempt to bring it home with them. Thierry decides to stay in Asia, marrying Madi after a Stateside operation separates the twins. Fred disappears.
A quarter-century later Fred, presumed dead, e-mails his partners to come back, in order to withdraw the deposit together. Dan brings his son, Robbie. Alas the money has already been taken by a man called Marlowe and Fred is ensconced in the highest temple in the Himalayas. He never sent the e-mails, but Thierry did using his name.

The Devil’s Road to Kathmandu is a better backpacker’s book than Alex Garland’s The Beach. Khao San Road’s habitues will go for it.

Follow the drugs, the money, the past. An old hippie returns to Kathmandu after 25 years.

The Devil’s Road by Tom Vater is a great read. It’s the story of three 1970s hippies driving a rickety bus overland from Europe through Afghanistan, Pakistan, and India to Kathmandu. Long on naiveté, short on funds, they get involved with a couple of young women, a mysterious Frenchman, a set of Siamese twins who work as cabaret singers, some holy men, and drugs. Big time drugs. The deal they strike in Pakistan, they think, is their opportunity to pay for the entire trip. But get in trouble when it all goes terribly wrong in Kathmandu and the money disappears.
Twenty-five years later the hippies return to Nepal, back on the trail of the lost drug money. One is travelling with his son. I won’t tell you what happens next, nor the story’s climax, only that it’s a riveting read all the way from Hanuman Dhoka to Khumbu.
Vater is a good writer with an eye for detail and the ability to set a scene with authentic dialogue and evocative description. Somewhere east of Peshawar boy meets girl: “On the wide veranda that extended past the four guestrooms facing the valley, two western girls in their twenties were lounging on deep pillows, a freshly split watermelon on a steel tray in front of them. The younger one rose. Dressed in tight orange pants, flared at the bottom, and an Indian-looking white pyjama top, that seemed to have most of its buttons missing, she offered a glimpse of her tanned breasts to Dan, the first arrival to stumble through the door. Her shortly cropped hair showed off a long row of finely crafted Afghani silverware arranged along her right earlobe. The heavy jewellery emphasised her strong cheekbones and beautiful red lips. He noticed all this in less than three seconds…”
In Kathmandu, father and son converse in a taxi, comparing Nepal then and now: “‘So has it changed, Dad?’ Dan stared through the window, unable to take his eyes off the chaotic traffic they headed into. Trucks, buses, cars, motor and cycle rickshaws, motorbikes, scooters, ox carts [sic], hand-pulled carts, bicycles, cows and pedestrians jostled for space on a narrow two-lane street. Chattering rooftop monkeys applauded the confusion…
‘Yes, it has changed. No, it hasn’t. I don’t know. But they do have a real airport now. And slightly better roads. And far more traffic… And internet, supermarkets, air-con hotel rooms, bars, nightclubs. In Thamel… you can get anything you want. Even Marmite…’
Tom Vater first came to Asia in 1993 on assignment for the British Library. He was captivated, and stayed on as a travel-journalist,
criss-crossing south and southeast on various assignments. He writes in English and German and specialises in strange tales and happenings.
Among his feature articles on Nepal is an encounter with Maoists in the hills, a description of animal sacrifice at Dakshinkali, and an
interview with the serial killer Charles Sobhraj (firmly ensconced in a Kathmandu prison).

Vater has also published a well-received travel book, Beyond The Pancake Trench: Road Tales from the Wild East (Orchid Press, Bangkok, 2004). It
has been described as “a wholly enjoyable book, free of the pomposity that dogs many travelogues and… the antithesis of the coffee table book” (The South China Morning Post).
The Devil’s Road is available at Mandala Bookpoint and Vajra Books in Kathmandu, at Orchid Books in Bangkok, and online at orchidbooks.com or amazon.com

Three friends, two cities, one bus and a seemingly endless supply of narcotics: a typical GAP year? Maybe not. It’s 1976, and the lads’ road to Kathmandu – through pre-revolution Iran and feudal Pakistan – is paved with self-destructive yet philosophical tendencies; the likes of which have, in the context of today’s North Face-backpacker hegemony, gone the way of the Dodo. Vater sets scenes on a razor edge, catastrophe, oblivion and unbridled passion waiting for these volatile characters to lose their balance – a common fate when you’re stoned out of your tree. Multiple narratives and parallel plots give this book breadth and depth – quite a mind trip, actually, and a rather addictive read.

…harrowing, darkly humourous … journalist Vater brings to the realm of fiction his trademark vision of a world where deserving has little to do with what you get. A gripping and clever tale of sex, crime, love, narcotics and greed, though not necessarily in that order.

This is the first novel from one of Asia’s most prolific writers, German-born Tom Vater, covering much the same terrain as his huge catalog of incisive travel stories. Meaning, witty, often acerbic, but always accurate thunderbolts of mind-bending passages that penetrate to the core, leaving nothing – and no one – unscathed. The action spins around Vater’s favorite turf: a drug-infused joyride across Asia and the turbulent aftermath a generation later, when a former band of hippies return to Kathmandu to settle the score from a distant deal that went bad. Along the way, Vater takes readers on a roller coaster of verbal riches, from the bleak mountains of Afghanistan to the lowlands of India, building on the depth of description and infectious infatuation with Asia that infused his collection of travel tales, “Beyond the Pancake Trench”…’.

The Newar and their Tattoos

Dakshin Kali – Bloodbath for a Goddess, in Untamed Travel Magazine