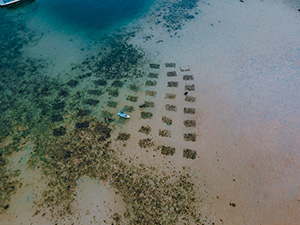 The world has lost half of its coral reefs in 30 years. Malaysian oceanographer Anuar Abdullah has developed a simple, yet effective way to restore coral. He tells Eco-Business that no reef is the same, and successful reef rehabilitation depends on cooperation with local communities.

Over the past 30 years, more than 50 per cent of reefs have disappeared and more than 75 per cent are damaged. Another 40 per cet of the remaining coral may disappear in the next 30 years, unless there is a global conservation rethink.

With every reef lost, essential food, protection and spawning grounds for marine life disappears and biodiversity decreases. With coral on the wane across the globe, the marine food chain is under strain and commercial fishing stocks are threatened.

Anuar Abdullah studied oceanography in Florida and began looking at ways to regrow coral in the Perhentian Islands in Malaysia in 1981. At first the 61-year-old Malaysian’s efforts proved futile.

“Locals used to come and watch me on the beach, tying bits of coral to rocks and they laughed. For twenty years, I observed the behaviour and life cycles of coral. And at first, I failed to grow coral. But looking back, I needed to fail many times to get it right in the end. On land we have been planting, growing and cultivating trees for thousands of years. With coral, we have only recently become aware, in the last 35 years, of the need to take action.”

Read the full story at Eco-Business.