After showing at numerous international film festivals and several broadcasts on terrestrial European television, Marc Eberle’s The Most Secret Place on Earth (The CIA Covert War in Laos), co-written by Tom Vater, was screened a second time at the Foreign Correspondents Club Thailand in Bangkok on November 22nd, 2010.

Director Marc Eberle, screen writer Tom Vater and writer/anti war activist Fred Branfman, one of the principal characters in the film, were present at the screening. 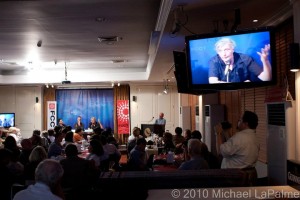 The FCC was packed, Australian journalist Jim Pollard hosted the event, and the panel Q&A was interesting with some great questions and contributions from the floor:

A lecturer from Mahidon University asked how much the CIA was involved into Thai politics today.

A nobel peace laureate (Susan Walker, who shared the price (as a member of ICBC) in 1997 for her work on banning UXO) also turned out to be the daughter of an Air America pilot (Father made war, daughter cleans it up – the archetypal and defining American story of our time?).

The Laotian wife of a Russian journalist poured her heart out about the US bombing she survived in Laos.

Above all, whistle blower, anti-war activist and friend Fred Branfman delivered a blistering talk on US foreign policy in relation to Laos, Vietnam in the 1960s and 1970s and Afghanistan and Pakistan today, reminding us that the US government, a criminal syndicate, as he put it, is responsible for 21 million deaths since WW2, engages in systematic war crimes as defined by the Geneva Conventions and the Nuremberg Trials, and is running death squads without oversight around the world today, just as they did in Southeast Asia in the 1970s. Fred closed with the remark that is it not politics that makes the world so catastrophic but our sick species, us non-humans. 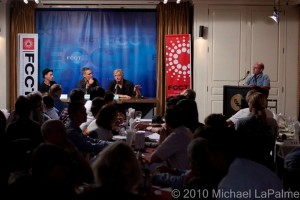