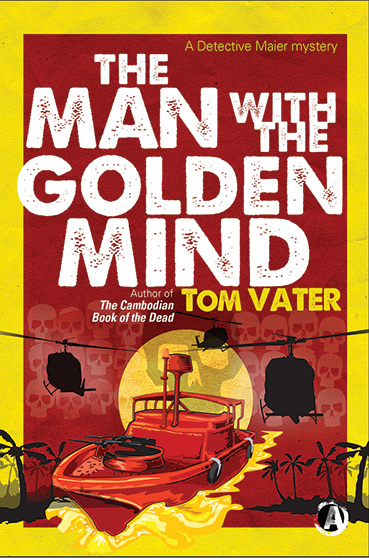 Stuart Beaton interviews me on The Man with the Golden Mind…and everything else at The Small Picture Postcast today. Thanks Stuart.

Julia Rendel asks Maier to investigate the twenty-five year old murder of her father, an East German cultural attaché who was killed near a fabled CIA airbase in central Laos in 1976. But before the detective can set off, his client is kidnapped right out of his arms.

Maier follows Julia’s trail to the Laotian capital Vientiane, where he learns different parties, including his missing client are searching for a legendary CIA file crammed with Cold War secrets. But the real prize is the file’s author, a man codenamed Weltmeister, a former US and Vietnamese spy and assassin no one has seen for a quarter century.

Tom Vater is a writer and publisher working predominantly in Asia. He is the co-owner of Crime Wave Press, a Hong Kong based English language crime fiction imprint. He has published three novels, The Devil’s Road to Kathmandu, currently available in English and Spanish, The Cambodian Book of the Dead, and The Man with the Golden Mind, released by Crime Wave Press in Asia and world wide by Exhibit A. Tom has written for The Wall Street Journal, The Times, The Guardian, The Daily Telegraph, The South China Morning Post, Marie Claire, Geographical, Penthouse and other publications.

He has published several non-fiction books, including the highly acclaimed Sacred Skin (with his wife, photographer Aroon Thaewchatturat) and the more recent Burmese Light with photographer Hans Kemp. Tom is the co-author of several documentary screenplays, most notably The Most Secret Place on Earth, a feature on the CIA’s covert war in 1960s Laos. In his spare time, Tom travels and plays punk rock.

Tom is a brilliant author, and it was great to talk to him again – he’s got to be one of the most widely travelled Asian reporters going, and his range of work is incredible! This interview not only looks at Tom’s new book, but also his thoughts on the latest Thai coup, his current rock tour of Europe, and his and other authors’ upcoming Crime Wave Press books… it’s a pretty packed quarter of an hour!

Cover Preview – The Man with the Golden Mind – Out Soon!

The Man with the Golden Mind reviewed at Categorically Well Read