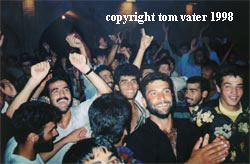 As the USA is threatening war with Iran again, I am republishing the only football story I´ve ever written.

Watching the World Cup Match between the USA and Iran in Esfahan in 1998, was one of the highlights of my time in Iran. The streets of this beautiful city were crammed with revelers, celebrating the victory of their team, as well as life and expression.

21 years later, the story reads a bit quaint. Times have changed – America is run by a serial liar fronting a far right government, isolating itself even as it continues to invest time, manpower and money into combating perceived foes, while Iran has opened considerably since my visit, signed a nuclear deal with the international community, keen to recover from years of crippling sanctions. Thanks to American lawlessness, the countries are on the brink of war again.

The magic energy of Esfahan in 1998 remains my fondest football memory.

Getting there is half the fun, they say.

That’s what I thought, when the fat cop with the stubble grabbed my nuts in his little roadside shack, a few miles across the Pakistan border into Iran, on the way to Zahedan.
‘You have any drugs? You smuggle anything?’ his stale breath is very close to my face.
Two shady Baluchi guys in flowing white Pakistani shirts and pants are lingering outside, revving the engine of their shit-sparking racer that has been our preferred mode of transport across Iran. The cop eventually lets go, frustrated that I did not try and shift a kilo of heroin from Pakistan into the Islamic Republic of Iran. Then he could have torn them off and the only one complaining would have been myself.
I was on my way to watch a football match between the two most evil countries in the world. Iran and the United States were, by chance, placed in the same group in the 1998 World Cup in France. I had decided to watch the match in Esfahan, Iran’s most beautiful city.

The game promised to have enormous political significance. US President Clinton and Foreign Secretary Madeleine Albright both made fluffy statements about American ties with Iran improving, almost 20 years after the Islamic revolution had replaced the corrupt and murderous right-wing US-backed Shah with an orthodox Islamic state not known for being particularly enlightened either. Clinton had even gone so far as to say, that he hoped the match would help reach rapprochement between the two countries. Twenty-one years later and the Americans are rattling their depleted uranium sabers on Iran’s doorstep. But that’s another story.

Iran was an oppressive kind of place in 1998. On the road between Kerman and Bam, all public buses were stopped at roadblocks and passengers were forced to line up along the tarmac to have their bags, all neatly lined up in front of them, searched. At times, the police, thugs that they were, got angry for little reason and spilled the entire contents of people’s bags on the highway. The undersides of the buses were searched with mirrors. The authorities did not appear to be looking for anything in particular. It was that kind of place. Harassment stopped at once when foreigners had been spotted among the passengers. 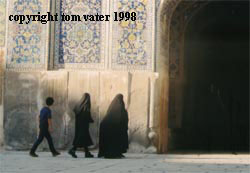 But the Iranians are great, hospitable people and the country as a whole seemed to be just as safe and open-minded than, say, the USA. In the cities at least, the religious pressure came from state organs, the secret Islamic police. No citizens advertised the merits of Islam while I slowly moved towards Esfahan. People wanted to talk football and tourism and how I could help them leave the country.

I spent the afternoon before the match on Esfahan’s Imam Square, in the shadow of some of Persia’s most beautiful mosques, playing football against the police. I had two soccer crazy Mexicans and a couple of decent Brits covering for my own ineptitude on the pitch. The police were already playing the international match in their heads – against us. It was rough. National honor was at stake on their side, two obsessed Mexicans on mine. I can’t remember who won. I guess the Iranian security forces must have clinched the game, because I do remember the second half being brutal and I got laid flat out a few times.
By late afternoon, the square, usually a popular picnic spots for thousands, lay deserted. Football fever was gripping even the last mullah on the pitch. Iran has some football history. The Persians reached their first FIFA World Cup as the sole representative from Asia at Argentina in 1978, when they drew Scotland 1-1 in between losses to finalists Holland and powerful Peru. Twenty years later they were back, facing the ‘Great Satan’ across the pitch in France. By early evening, I was slouching in a sofa in the lobby of an up-market hotel, hemmed in on both sides by the Mexicans, counting my police–induced bruises. Most of the hotel staff was crowded round the TV set an hour before the game had kicked off.
In fact, no one in Iran saw the kick-off, because Iran’s mullahs delayed the broadcast and edited scenes showing Iranian opponents in Lyon’s Stade Gerland. The political undertone of this match wasn’t lost on anyone. While many Iranians dislike their autocratic government, they love their countryand perceive the US as a meddling foe, irrespective of the home-grown propaganda that rains down on them day and night.
Things got off to a good start. Prior to kick-off, each Iranian player gave his counterpart on the American team a white flower and the teams joined for an uncustomary group photo. By the time the game kicked off on the TV in the hotel lobby in Esfahan, the streets of the city were utterly deserted and an eerie silence had descended over this desert metropolis. For the hotel staff it was a white-knuckle ride from minute one.
For everyone else it was an average game that felt a little like it had been rigged. Both teams played exceedingly fair – unlike my opponents during the police-tourist match in the afternoon, the pros went out of their respective ways to avoid any brutality. Iran claimed their first victory in a world cup by beating the USA 2 to 1.
As one commentator put it, ‘The USA failed to impress in all of their games finishing with three consecutive losses and a single goal.’
Needless to say, the historic win failed to substantially improve relations between the two countries, but it made Iran the only one of the four Asian sides at that tournament to win a match.

Twenty minutes after the game, the first vehicles started racing along the main. Car horns  howled past the hotel lobby. Flatbed trucks began to arrive in the town center, loaded with football fans. The atmosphere was electric and we made our way down to the river where thousands were celebrating victory. Girls were dancing in the street and on the back of the flat-beds. Men raced their bikes and wore ecstatic glazed expressions, despite the fact no one drank. Iranian flags flew high above the crowd and the security forces were out in force. But tonight they weren’t moving.
One fan told me, ‘This is the first time we have had a street party since 1979. It’s a great victory for us. But this is also a political demonstration. We are showing the government that we have power.’
The cops kept their distance until they spotted the foreigners. Us. One uniformed officer approached me and said, ‘We will take you to your hotel. This is for Iranians only. Foreigners cannot watch. You must stay in your hotel.’
We were marched back to our rooms across town, passing celebrations.
Today, Iran is still a country where guests are likely to be banned from street parties and where the mullahs rule. America is still a country bent on attacking an old foe. Should the US have a go, thousands of civilians will perish, as we have come to expect from the wars they inflict on the world – mothers will lose their children and children will lose their limbs and never play football. But then, Americans don’t really understand football much. While a third of the planet watches the Great Game, the US prefer to stick to the local version – American Football – a noisy spectacle whose players look like they are going into combat. Ah, it’s lonely at the top.

First published in Untamed Travel in 2002.

The Devil’s Road to Kathmandu – A Blackthorn Book Tour

Brand new paperback edition of The Devil’s Road to Kathmandu