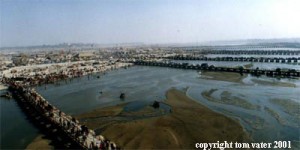 The trailer for the first documentary film I worked on (screenplay and production manager), The Greatest Show on Earth, can now be viewed on director Marc Eberle’s website.

The 30 min documentary follows Alok Sharma, the top policeman in charge of the 2001 Maha Kumbh Mela, the largest gathering of people on planet earth, ever!

Being involved in the making of a film for the first time is an amazing experience. Making a film in India at a huge religious festival was an even more mind-blowing enterprise. Life changing, I´d say. On the festival’s main day, more than 20 million people gathered in prayer on the shores of India’s holy rivers, the Ganga, the Yamuna and the mythical Sarasvati, and at a cosmically auspicious time, all took a dip in the holy waters.

Over the course of the three month festival, more than 70 million people dropped by. The three weeks we spent at the festival site in Allahabad in Uttar Pradesh had an otherworldly, surreal quality. The film crew felt like they were on drugs, though we had no time to get inebriated, there was simply too much to see. We shot for 16 hours a day, walked 20 km with all the gear every day (including a collapsible crane) and then spent the nights watching the rushes. The religious electricity emitted by hundreds of thousands of mostly elderly Hindus is like an emotional superconductor that makes one’s hair stand on end. The nights were bitterly cold, then, as soon as the sun went up, the entire festival site became an open air oven. Camera man Christopher Rowe lost 10 kg in eleven days of shooting. At times the crowds were so dense that we were simply swept along in whatever direction the pilgrims were moving, utterly incapable of heading for any particular destination.

Most fascinating were the thousands of sadhus – India’s eccentric holy men –  who flock to the Kumbh Mela and reserve the right to enter the sacred waters first, before the pilgrims are allowed their dip. The dread-locked and stoned ascetics stayed in huge sprawling tent camps, performed unlikely physical feats, like pulling jeeps with the penises, demonstrating how they had stood up for the past seven years or putting the chief minister in his place.

The Kumbh Mela is also a religious supermarket and countless swamis and gurus, religious teachers, offer their services. Some of these seers run huge camps and attract thousands of devotees while others just gather a handful of faithful and presumably offer more modest teachings than their more successful peers. All of them seemed to have access to tannoy systems and the entire sprawling festival ground reverberated with prayers and bhajans (sacred songs) all day and all night. There was little opportunity to sleep and I remember passing out each night, utterly exhausted while laughing along with the incredible cacophony all around us, literally laughing myself into sleep.

Ever since the Maha Kumbh Mela, I have been thinking of catching up with this once in a life time experience once more. The next Maha Kumbh Mela takes place in 2013. Now, almost twelve years older, I am less enthusiastic, and not at all sure whether I have the energy to swim with the world’s largest crowd once more.Working on my first ever film, witnessing this gigantic outpouring of faith, I was too happy and now years later and thousands of other experiences in the can, I suspect it would not be the same. Perhaps some things, no matter how great, are best left as memories. That said, give me an assignment and I will stand in the front row with the ash smeared naga sadhus, ready for the holy dip.

The documentary was first broadcast on arte (French/German television) and has also been broadcast on Discovery.

Hard choices in the Andaman Islands in The Nikkei Asian Review

Kokata Noir reviewed by Was Stanley