I published the following story about Provence, a wine growing region in southern France a couple of years ago. At the time of writing, I was just getting to know the protagonists of the text.  I stayed in touch with all of them. Eric Bouletin continues to grow excellent wine and Junko Takase continues to sell wine.

I had known Eytha Badchen, ex-patriate artist extraordinaire, former Paris bohemian and well-known local artist in Vaucluse for some years prior to writing the article. Despite our age difference, I considered her my best friend in southern France and spent many afternoons in her strange tower, later in her apartment, listening to stories of her life in Paris with Gertrude Stein and a circle of Japanese painters who deeply influenced her art, and of California, where she lived with Henry Miller in Big Sur, as well as her trips to Angkor and Tibet in the 1960s. We shared a love of Beat writers and other 60s hipsters, most of whom she knew, none of whom I ever met. She was a window into a literary and artistic past that I knew only from books.

The last time I saw Eytha, a couple years back, she  was in hospital, after she had broken her hip and I had a feeling that she´d had enough. She was in her early 80s then. Even at that age and in those last moments, she had a youthful twinkle in her eyes, that often gave her the aura of a young woman. I´d never met an old person who could be so young, and her somewhat frivolous ways of dealing with age have been a huge influence on my own journey as a writer. Eytha Badchen died soon after that last visit. Now, when I am back in southern France, I detect traces of her everywhere, in the light and the soil with which she identified so much in her work.

Eytha had as many secrets as she had tales and she took them all with her. I am left with a pile of her Joseph Conrad novels and one of her paintings. And this rather vapid story, which may not do her justice, but is now, in retrospect, a way to remember an old friend.

Mellow street cafes, crammed with grinning old-timers slurping pastis and in the cities, bistros frequented by scores of beautiful young things in skimpy but fashionable outfits, all create a cultural street-life and unique joie de vivre in one of France’s most attractive and homogenous regions – Provence.

Provence means different things to different people and no one can agree on where its exact boundaries lie. One could define the area between Orange, Nimes, Arles, Marseilles, Aix-En-Provence and the Gorges of Verdon as Provence. But perhaps the clear demarcation of geographical borders isn’t so important.

Sun-soaked Greek and Roman ruins, medieval churches, mountain villages, lavender fields and, of course, miles and miles of vineyards, that stretch into infinity under deep blue skies all contribute to the ambience.

One could describe a local market in a small town such as Vaison-La-Romaine as the very definition of Provence: The smell of fresh herbs and juicy tomatoes, of strong cigarettes and lavender, and the loud call of the vendors amidst the crowds of shoppers – old traditionalists in dapper couture who rub shoulders with young Arabs in hip-hop outfits.

Provence is a smell, a political hue, a lifestyle and a riot of color. Most importantly, the region is the nexus of France’s southern lifestyle, as well as one of the world’s best known wine-growing regions. And foreigners – from artists to escapists – have long discovered the region as a great place to live.

Eric Bouletin, a young wine maker from Vacqueyras, has been creating his own brand of high quality wine for the past five years, as did his father, grandfather and great grand father before him, and his red Domaine Roucas-Toumba graces the shelves of specialist wine shops and up-scale restaurants all over the world.

“I feel a very strong connection to the soil. The people here are attached to the earth in a very basic way. We feel the way our ancestors did, but we are also very open to the world – that’s part of our culture.”
Drily he adds, “Sure there are some racists amongst us, but the majority of people in Provence welcome visitors and we have a great way of absorbing newcomers.”

The wine maker, like many of his compatriots, stands with one foot in the past, with the other firmly in the future. In a place as timeless as Provence, it is hard to imagine change, but everyone of course has their worries.

“All sorts of people live in the villages, all classes live side by side. The real problem for us today is that many young people leave for the cities and there’s a danger that only the old will remain one day, or that the cities get so large they swallow up the villages.”

Bouletin is doing his best to counteract local prejudices and land-flight. Three years ago, he met Junko Takase, a Francophile Japanese wine trader and together they have embarked on building a family and a small but significant international wine empire.

For the young wide-eyed culture-shocked Takase, the beginnings were not easy.

“Europeans looked so serious to me,” she laughs, “Their eyes were so blue, I could not believe they would ever think or do anything funny.”

Takase had to overcome not only her own fears, but needed to understand French culture, and quick, if she wanted to survive.

“I used to be invited for dinners, but, in France, if you don’t speak French, you are totally ignored. In Japan, we try to communicate with our foreign guests and involve them into our conversation, but here, it was exactly opposite. After some time I understood that it was not my color or race, but my inability to speak, that kept me out. If you can speak, the walls come down.”

American expatriate artist Eytha Badchen arrived in Provence in 1972, after living in Paris for almost a decade. The 83 year old abstract painter, a well-traveled urbanite originally from Chicago, experienced Bouletin’s romantic connection to the soil and Takase’s fears herself when she first visited the region, “What I remember from my very first visit was the black, incredibly rich soil of the region. The people who lived on and worked this soil were all connected to the culture of the region. In those days, no one cared what one could buy, no one cared what one wore. And the light in Provence was so bright and honest, nothing fabricated, no neon, it was very pure. The light had a great influence on my painting.”

But it was more than just landscape and sunshine that fascinated Badchen.

“Towards the end of the 1960s, Paris became more money-orientated and industrialized. In Provence people enjoyed life in a different way. They enjoyed eating good food, or took a walk up a hillside. They enjoyed simple pleasures and were interested in essential things and values. My neighbor used to go down to the coast, search for crustacians and bring his catches home. He felt no need to go to a store.”

Surprisingly, Badchen did not miss her urban past. “I used to think cities, especially Paris, were the center of everything. But in fact, lots of things happened down here in Provence. Picasso and Braque both worked here. So I moved into an old tower in a small village and started an artists’ circle which worked together for many years.”

Provence continues as an art magnet. There’s the annual theatre festival in Avignon, the former seat of the French popes. In Arles, gigantic photo exhibitions are held each summer at numerous venues all over the city, if only to distract from the magnificent roman ruins.

Above all, Provence is a light. In the early mornings and late afternoons, a golden hue lies over rocky hills and sumptuous vineyards and the red tiles on the farm houses dotted amongst the fields seem to almost hum with warmth and color. It was not only the painters who noticed this.

In fact, Provence is as much an intellectual mind-space as a region, a complex, proud, beautiful and conservative part of La Grande Nation.

Jean Giono (1895-1970), a well known local writer suggested Provence did not really exist as a place and that those who liked it, liked the world. Those who didn’t, didn’t like anything.

Somehow, this rather grand observation still holds firm. Time has stood still and the light retains its golden honesty.

And yet, for those outsiders fascinated by the region, a strange inversion has taken place.

For many, like Badchen and Takese, Provence proved to be a destination it was necessary to reach in order to commence their journeys.

If possible, with a good bottle of wine. 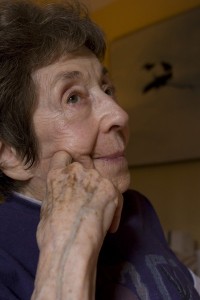 6 thoughts on “From the Archives: Postcard from Provence”