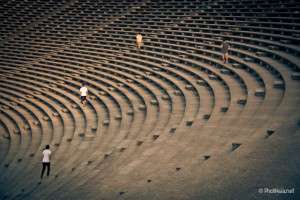 Several sources suggest that the legendary, historic Olympic Stadium in Phnom Penh is likely to be demolished soon to make space for a development of the Canadia’s Bank Overseas Cambodian Investment Corporation. (OCIC). It appears the bank, in conjunction with someone at a high level within the Cambodian government, had originally planned to develop only the area around the stadium, but now it looks like the entire structure is to go.

Of course, you’re right in thinking that the Olympic Games never took place in Cambodia. Yet, there’s an Olympic Stadium of Olympic proportions, nowadays called the National Sports Complex, located in the West of the City, a little north of Sihanouk Boulevard. The complex was built in the early 1960s, following designs by renowned Cambodian architect Vann Molyvann, in order to host the Games of the New Emerging Forces (GANEFO), a sports initiative thought up by the Chinese. The games took place just once, in Cambodia, in 1966. Eighteen countries participated and Cambodia won thirteen gold medals.

During the Khmer Rouge years, the lawn in the stadium was turned into a cabbage field. Buildings include the stadium that seats 84,000, a hall for boxing, which seats 10,000, as well as an Olympic size swimming pool. Following years of neglect, the complex has now been restored. The halls and courtyards are used for political events and concerts, though perhaps ot for much longer. Looks like the stadium will succumb to the greed of developers and the Cambodian government, just like the Boeng Kak area and many of the city’s historic landmarks.

In recent years, the stadium has become a popular meeting point and sports space for ordinary Cambodians, who are likely to loose yet another part of their city to a small and powerful elite.

The culture of unchecked impunity is alive and well in Cambodia, making the capital increasingly less attractive, destroying its history and diminishing its heritage.

Check out my story on the architect of the stadium, Vann Molyvann, which ran as a cover story in the Weekend Magazine in the Asia Wall Street Journal.

2nd Revised Edition of Cambodia: Journey through the Land of the Khmer out now