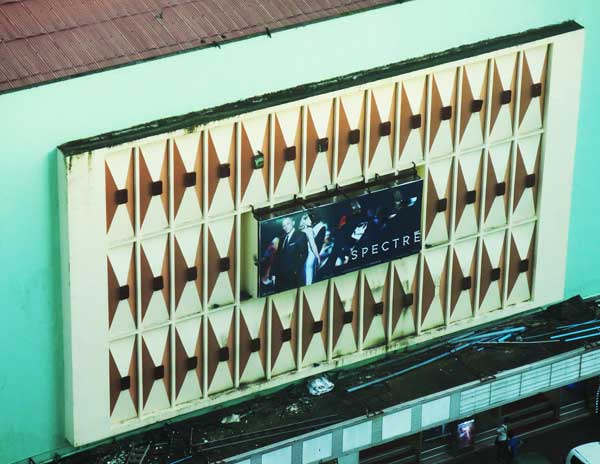 Went to see the new James Bond movie in Yangon (Burma) yesterday. A bit slow to start with, supported by plenty of crackling and chewing noises from the audience devouring vast amounts of sunflower seeds, Spectre was almost Citizen Bond, taking on the current global obsession with surveillance of everything, with 007 serving as a kind of ultra-violent Ed Snowden. Ironic then that many people in the audience were more focused on the screens of their smart phones and pads than on the movie, turning the cinema into a sea of white lights that competed with the onscreen explosions. After the show, the hall looked like the lair of Spectre post-destruction, covered in sunflower shells, pop corn and other snack debris.

Addendum:  Spectre was lame. Monicca Bellucci was wasted in her role, the young heiress to the Gaumant/Pathe empire clearly got the role because of who she is, Christoph Waltz,who played the super villain, brought far more menace to earlier roles than this one and the Jaws type thug was only memorable for the one word he said in the entire film, ‘shit’.

The camera work was a bit flat too and the first half was so slow it looked like an arthouse movie that went nowhere. But that wasn’t my point. I liked the fact that the movie picked up a counter-cultural issue touching on the Zeitgeist, albeit in a corporate entertainment context, and that the Burmese audience were oblivious to it because they all had their noses in their own screens playing candy crush, chatting with their aunts in Myawaddy or grinding up dried seed pods and chuckingspitting them across the row of seats in front.