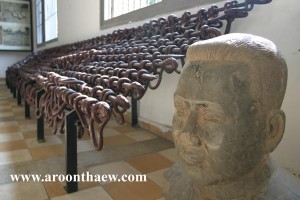 The UN tribunal in Cambodia, set up to investigate crimes against humanity allegedly (a very small allegedly, the accused are all guilty) committed by the Khmer Rouge, finally passed its first judgment today.

The Khmer Rouge, a radical communist rebel movement, are responsible for the death of some 1.7 million people. Between 1975 and 1979, the Red Khmer attempted to introduce stone-age communism in this small Southeast Asian nation of eight million people. Schools, money and post offices were abolished, the cities were emptied and anyone who could think was murdered in Cambodia’s notorious Killing Fields. When the Vietnamese finally liberated Cambodia in 1979, the Khmer Rouge had managed to kill off almost a quarter of the population. Only the most uneducated were left alive.

The currently accused in the long-running UN tribunal were all at the heart of this butchery. Comrade Duch, the man who ran the notorious S-21 prison camp in the country’s capital Phnom Penh, a former school in which some 14.000 people were incarcerated, tortured and killed, was the first to be sentenced – to 35 years – today. Prosecutors had asked for the maximum sentence of 40 years. Duch had asked to be acquitted, as he has been a Christian in remorse for decades and had simply been acting under orders.

But Duch will not even have to sit 35 years. As the court ruled that the S-21 chef had been held illegally by the Cambodian military from 1999 to 2007 and had already served time, they sliced 16 years off the punishment. In the worst case scenario, Duch will sit in jail until he is 85. Then he will be a free man. The judges said he had potential for rehabilitation.

As things stand, Duch is serving less than half a day for every person he had personally ordered to be starved, mutilated, blinded, hung, castrated, electrocuted, raped, drowned and finally beaten to death in S-21 or the Killing Fields at Choung Ek. The former S-21 commander was a maths teacher, he will have worked out his relative victory by now.

So what does it all mean?

We have shocked and despairing witnesses who cannot understand that the international community, represented by the UN, comes to Cambodia and spends millions of dollars on a justice process designed to court-manage one of the great atrocities of our time into something that will be acceptable to everyone – everyone with power and money that is.

Many observers compare today’s political climate to the days before the communist take-over in the early 1970s – the culture of impunity is rampant, there is no social discourse and politicians of the parliamentary opposition are intimidated. While the tribunal has been proceeding through a morass of controversy, it has been reported that rich foreign tycoons and international companies have bought up some 45% of Cambodia’s land mass. As a consequence, the forced movement (eviction) of people is the largest since the Khmer Rouge days. Some commentators allege that the tribunal is a farce, so long as the roles of the US, China, Norodom Sihanouk and some of the former Khmer Rouge still in government, are not addressed. But a more probing and honest trial is not likely. In this context, the UN Tribunal appears to be just another one of many cruel disasters that has befallen Cambodia.

Duch has reason to be content and is probably filling in his application for a deluxe cell with sea view. He could be playing golf with the stars in a couple of years. Or perhaps run another children´s school. Anything seems possible in the face of today´s verdict. Whether the other aged KR death-troopers in the dock – all of them more sophisticated mass murderers than Duch – will ever be sentenced in the current climate of horse-trading is uncertain.

In this air of international legal unreality, one might suggest setting up special tribunals for judges who serve on UN tribunals and contribute to the misery of the people on whose behalf they allegedly act. Otherwise, men like Duch will keep getting away with murder.

Srey Thy sings The Cambodian Book of the Dead