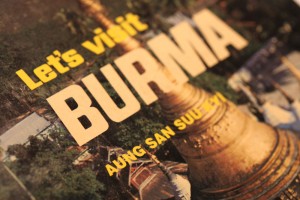 As the Burmese generals celebrate another well-deserved victory today – no, not the election results which are a foregone conclusion, but the staunch support the regime receives from China, India and Thailand, while European and American businesses are doing their best to get around sanctions so that, they say, Myanmar does not become a province of China – thus goes the reasoning for their kindness – I am republishing a piece on the pros and cons of engaging with Burma as a visitor.

I was browsing the shelves of a dilapidated bookshop in Kolkata last month when I came across Let’s visit Burma, a small format, 96 page hard cover title, published in 1985 and aimed at juvenile readers. Given its publication date as well as developments in the country since then, Let’s visit Burma should be a trivial, rightfully long-forgotten book, were it not for two remarkable facts: Let’s Visit Burma is an extremely well composed piece of educational writing, and its author is Aung San Suu Kyi, long incarcerated opposition politician, general secretary of the National League for Democracy in Burma (NLD), and winner of the 1991 Nobel Peace Prize.
At the time Aung San Suu Kyi authored Let’s Visit Burma, she was living with her British husband and children in Oxford and was not involved in Burmese politics.
Nevertheless, Let’s Visit Burma is more of a political beast than one might expect.

Let’s Visit Burma concisely covers the country’s turbulent history, its culture and natural beauty. More importantly, there’s a highly fluid subtext woven into this simple presentation of a South East Asian country. The opening chapter, A Wealth of Natural Resources, informs us that ‘for all its natural wealth, Burma is not among the rich nations of the world today.’
The third chapter, Building an Independent Nation describes the rise of nationalism against the British colonial rulers, followed by armed rebellions by the minorities in the country against the Burmese rulers. The chapter then goes on to describe how a fledgling democracy fell victim to the military in 1962.

‘Burma under army rule became a socialist republic, guided by the Burmese Socialist Programme Party. No other political parties are permitted. This, and other measures limiting the political liberties of the people, are aimed at creating a stable government and a united country. But unity can only come with the willing cooperation of the people. The government of Burma still has to cope with many rebels, prominent amongst them the Karens, Shans and communists. The economy has not been well managed and Burma today is not a prosperous nation. However with its wealth of natural resources, there is always hope for the future. And that future lies in the hands of the people.”

That future has not materialized. In 1988, Aung San Suu Kyi permanently returned to Burma and began to call for democratic governance amidst political turmoil. She quickly became a political icon of resistance to the ruling junta. In 1990, the NLD, the party she helped found, won 82% of the seats at the general election. The military junta refused to accept the results, killed and incarcerated thousands of opponents, while the author of Let’s Visit Burma has been under house arrest for much of the last 20 years.

One of the issues surrounding the repression in Burma is the continuing debate on whether tourists should visit the country or not. Those in favor argue that the money spent there puts food on the tables of the poor. Those campaigning against international tourism in Burma maintain that the money foreigners spend helps prop up the regime.
Aung San Suu Kyi and the NLD insisted for many years that tourists should not visit the country, arguing that much of the tourist infrastructure was built by forced labor and that holiday-makers visiting Burma were basically condoning the regime.

But some of the money tourists spend does reach ordinary people who have no other source of outside income. Perhaps the issue of tourism in Burma is not as clear-cut as it has been portrayed by Burma’s famous opposition politician. The harsh reality might simply be that visitors do inevitably line the pockets of the generals, while also giving much needed support to the people of Burma. Boycotting Burma has not changed a thing. Perhaps that’s why Aung San Suu Kyi repeatedly tempered her advice not to visit the country (in opposition to her allies outside the country), and more recently abandoned it altogether.

But before you rush off to book your flight to Rangoon, take a moment to think what would happen if we had the same moral debate about other undemocratic nations in the region with impressive historical sites, good shopping and clean beaches, or, to stretch the argument a little, about Western countries. Popular tourist destinations like Cambodia, Malaysia, even Singapore are ruled by governments hardly in tune with western ideals of political equality and openness.

And what about the US, which employs millions of Mexicans as illegal and cheap labor, runs death squads in Afghanistan and tortures prisoners it has kidnapped from public places around the world in its secret prisons? Is that (in principle) so different from forced labor and systematic rape in Burma? Is it bad enough to warrant a boycott? When does bad become bad enough?
Perhaps we are a bit hypocritical when it comes to Burma and tourism.
The sad truth could be just this: Whether to go on holiday or not is a simple choice in the global 21st century reality – either stay at home or understand that you will contribute to both the suffering as well as the well-being of some the people whose country you visit.

Published in the South East Globe.